I received a Kindle for Christmas, and I've kept its plastic screen protector on ghetto-styles ever since. I finally found some time to make myself a case for the Kindle. The Kindle is different from other electronic tablet-type things because you don't need to cover the screen or the body when you're reading. I just needed a case to protect it when I'm transporting it or when I'm not using it. Upon thinking of various designs, I decided a simple envelope to slip on and off would be best.
Supplies:
Sewing machine or needle & thread
Contrasting thread
Felt (exterior)
Fabric (interior)

I purchased my blue-grey felt at Moskatel's in Downtown LA for $0.29. It was my first time there, and I only had a few minutes to grab what I needed. Parking is free for 2 hours with purchase-validation, so it was easy. For the interior fabric, I used scrap Ikea fabric leftover from curtains.

(The photos are not very instructive bc this is the first time I took pictures along the way. Next time, I'll be better.)
First you want to make the interior, but you want to leave some fabric on the short ends in order to sew on the exterior later. To do so, you need to use french seams but not flip inside out at the end in order to create that extra fabric on the ends. If that's confusing, use this tutorial to visually understand french seams first.

Fold the interior fabric in half with the "wrong" sides facing each other. Sew along the short side. Trim the fabric.
Then, flip it inside out so now the "right" sides (the side with the printed pattern) face each other and the "wrong" sides are on the outside. Poke out your corners so they're pointy.

Sew about 1/4" away from that seam. Essentially you're sewing in the cut edges. Done. Now you just have to do the same thing to the other side. (Don't be like me. I put the wrong sides together at first so I had to pull out all my stitches. Pain in the a$$.)
I didn't make any measurements because it's easier to sew one side then pin the other side to find the  most snug fit. To calculate how far away to sew the other side, I stuck in my Kindle and pinned one side of the fabric to make a note of where to sew. You want to sew a little farther out than that pin because you have to flip it inside out and sew the french seam again.
When the interior is done, fold your piece of felt in half and sandwich the interior. Pin the felt down to the extra fabric flaps you made on the interior. Trim along that so your interior peeks out a little. I used contrasting white thread (pretty with the blue-grey!) to sew along the short ends.
To finish the opening side, trim the interior to how wide you want it to be. Then fold over the felt to envelope that raw interior edge. Sew along the long edges.
Then sew the short ends to seal it all together. For this last part, you can either a) not sew all the way along the short ends or b) sew all the way and then undo your stitches partially like me which takes longer and makes you crazier. 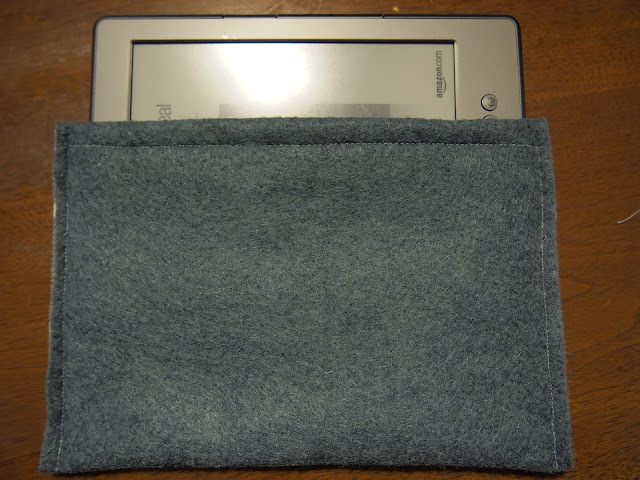