The City of L.A. is undergoing a redistricting process, and I'm pretty peeved at the way it's turning out.

From the last set of redistricting processes years ago, Koreatown had been split into multiple city council districts, supervisorial districts, Congressional distircts, State Senate districts, and State Assembly districts. In general, when a community is split into several political districts, nothing good can come of it:
Koreatown definitely suffered from the last round of redistricting. Koreatown was split into 4 council directs and "divided into five State Assembly districts until now. (Source)" What that really meant was when I was growing up in Koreatown, there were no parks, degraded infrastructure (streets, lights), no public safety program...

Progress has been made though. "This year, the greater Koreatown area was brought under one State Assembly district, one State Senate district, and almost completely within one Congressional district. The Commission’s final certified district maps are scheduled to take effect for the June 2012 primary elections. (Source)"

Unfortunately, the City of Los Angeles Redistricting Commission didn't get the message. Their proposal for redistricting splits Koreatown into 2 pieces (more, in my opinion) and infuriates everyone. Tons of people spoke out, but the Commission didn't listen, did some stupid things like draw up the districts in secret, and split up Koreatown.

Here is how people view Koreatown, and I agree more or less with the boundaries (not 100% bc I think it's larger than this).
The community ideally wanted to be redistricted like this for the following reasons:﻿﻿﻿﻿
﻿﻿ The final proposal (below) does not do any of this. So, people, myself included, are pissed that they didn't listen to public comment and they are perpetuating the prior issue of splitting up Koreatown. Some folks are even threatening to sue. 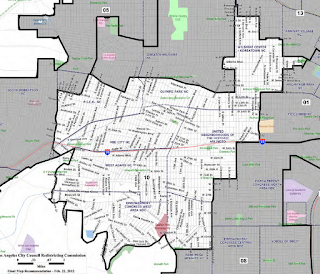 Don't forget though, that the rest of Los Angeles is being redistricted. Check this cool LA Times interactive map to see your old vs. new district. What's not cool is that other communities like Little Tokyo (near and dear to my heart!) are being jerked around to a new C.D.
Labels: Girl in the Curious City, Junette, Koreatown, los angeles