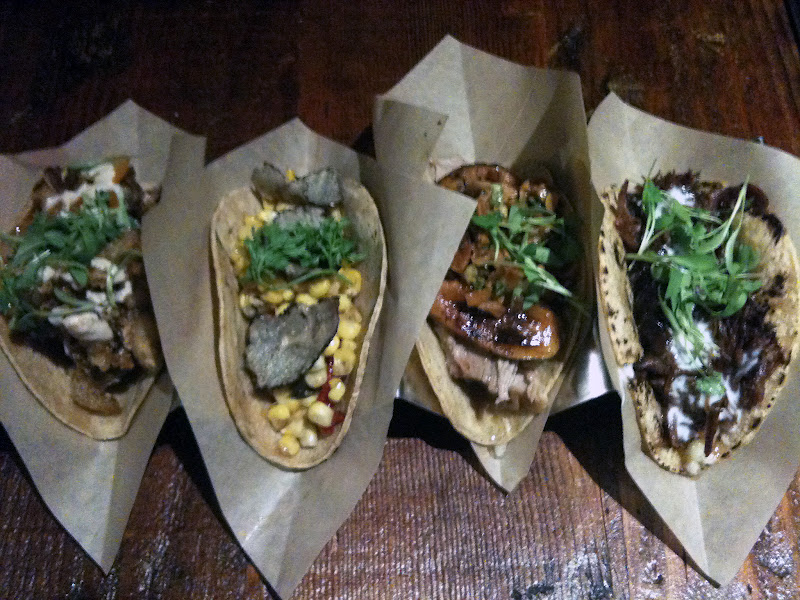 One day I was walking past this empty, run down storefront on Sunset Blvd and the next day poof! A new urban-hipster looking restaurant appeared. Think all black exterior with large wooden reclaimed doors and a restored brick interior with a super long wooden counter in the middle for communal seating and mingling.

Diablo claims to be an "urban taco fabricator" and I agree. They have 8 urban tacos on the menu and a few appetizers and salads. Of the 8, Antony got the Beef Cheek and Pork Belly and I got the Mushroom and Corn Piquillo. Diablo made it too easy for Antony to love the Beef Cheek when they added horseradish potatoes and fromage blanc into the mix, a well played take on the classic steak and potatoes. Pork belly has been all the craze in hipsterville so no surprise to see it on the menu here. Diablo's take on the Pork Belly was different in that it wasn't your usual Korean flavors but Thai instead with caramelized banana and cilantro-peanut relish. Antony's verdict? "Mmmm savory!" As for my two tacos, I loved the Mushroom - it was fried in a tempura batter and topped with tomatoes and an aioli sauce. The Corn Piquillo was a miss for me. It lacked flavor or maybe it just felt too much like I was simply eating corn salsa wrapped in a tortilla...definitely not worth $6. 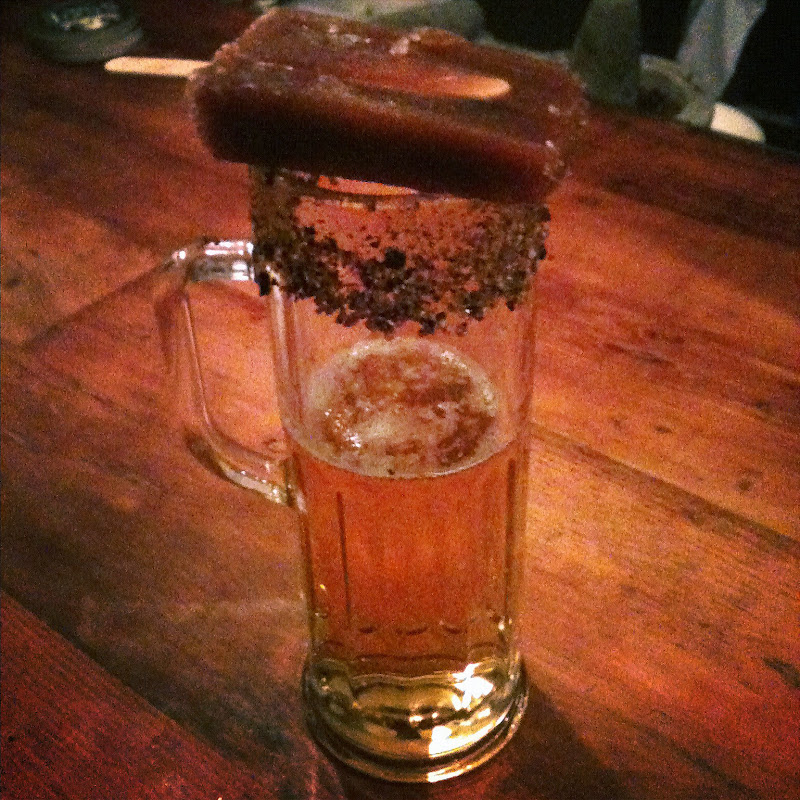 We got beers to go with our tacos, but not just any beer, we got The Michelada. It's your beer of choice (they have a full bar with lots of beers on tap), with a chili lime salt around the rim, and a flavor popsicle for you to drop into the glass. The only other flavor I know similar to this drink is the Mexican Lucas candy. So if you grew up sucking on that tangy mush like Antony did, then you will love it, and if you didn't grow up on it like me, The Michelada is still a lot of fun to drink. 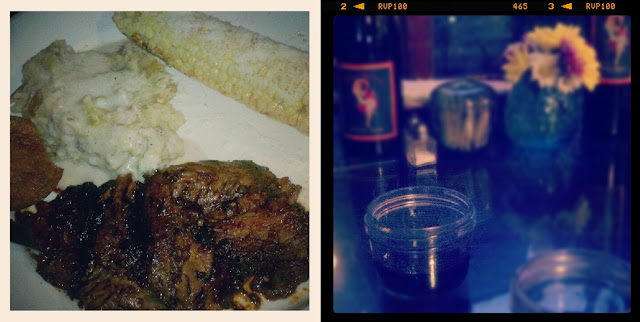 For my sister's birthday, we checked out a new-to-us spot in Eagle Rock, Larkin's Soul Food. First heard about it via Jonathan Gold / LA Weekly and the BYOB sold us.

As you can guess, there was BBQ, fried chicken, mac n' cheese, and the usual Southern food delights. I ordered the brisket with garlic mashed potatoes and corn. The plate came with cornbread, which was understated but very good. My brisket was melt-in-your-mouth, and the corn reminded me of the Mexican street corn you can find in LA. The mashed potatoes were nothing extraordinary, so I gave them to BDF to finish off. My sister had the fried chicken, which she was raving about. My bro-in-law ordered the fried shrimp (so-so), and BDF has the baby back ribs.

Our very nice waitress explained that one of the chefs just quit and a waitress just decided not to show up, so in exchange for our patience, she didn't charge $10 fee for BYOB. I guess they changed their policy sometime in the past few years (darn). Luckily for us, we had some wine (cutest squat mason jars) and beer without a fee, but I don't think you can count on it in the future.

Larkin's is located in an old house, and it's very charming without being fake. It remained steadily full the whole time we were there, and there were a number of tables on the porch and the back. I left Larkin's with a very full and happy stomach.