MONICA
Date night with two of my most entertaining friends began with watching Silver Linings Playbook which tickled both our funny and sappy bones, and concluded with indulging in the culinary experience that is Ink. 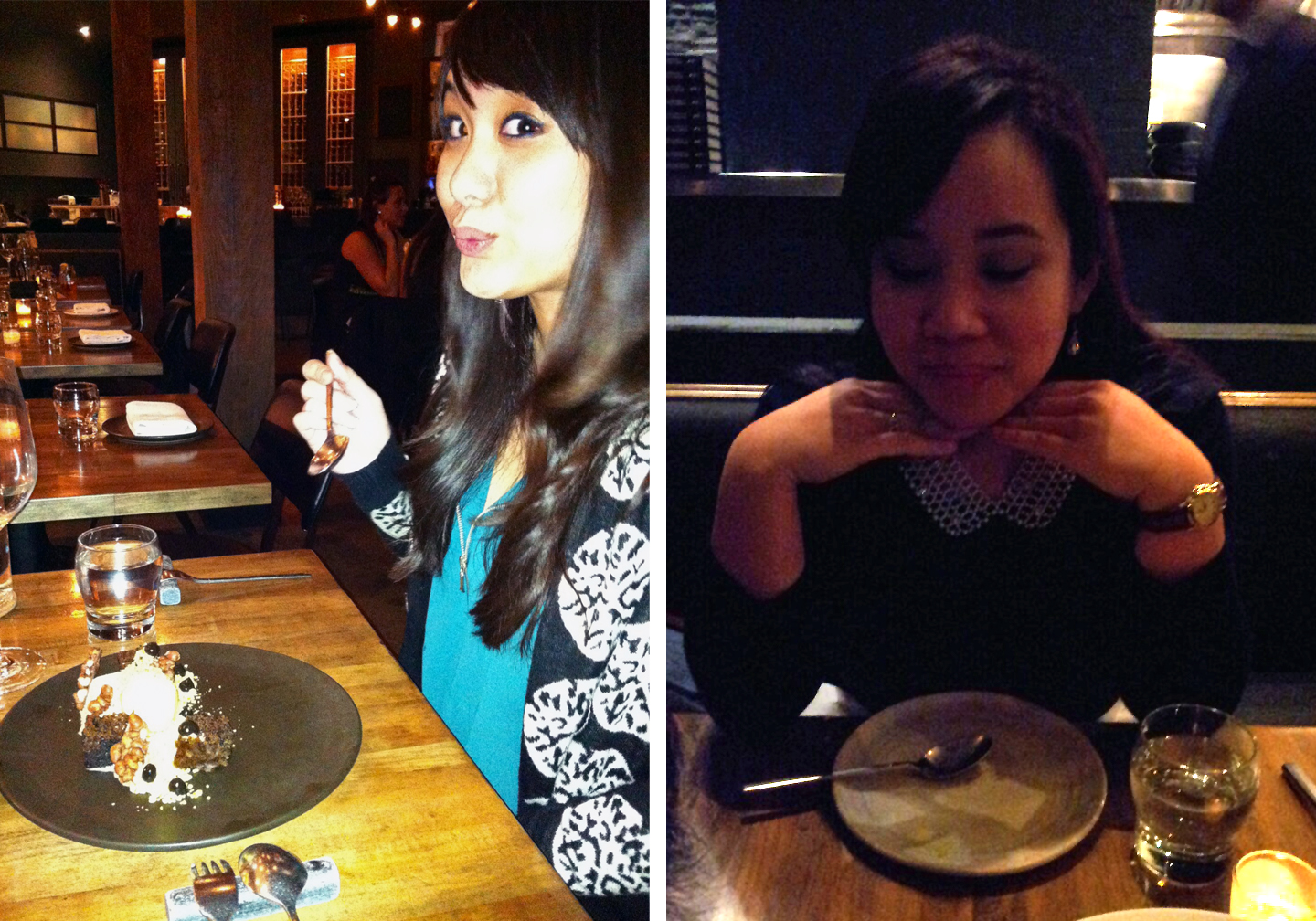 Both Chandra and Rina looked extra cute and fancy for me since I have such high standards for my dates.﻿ 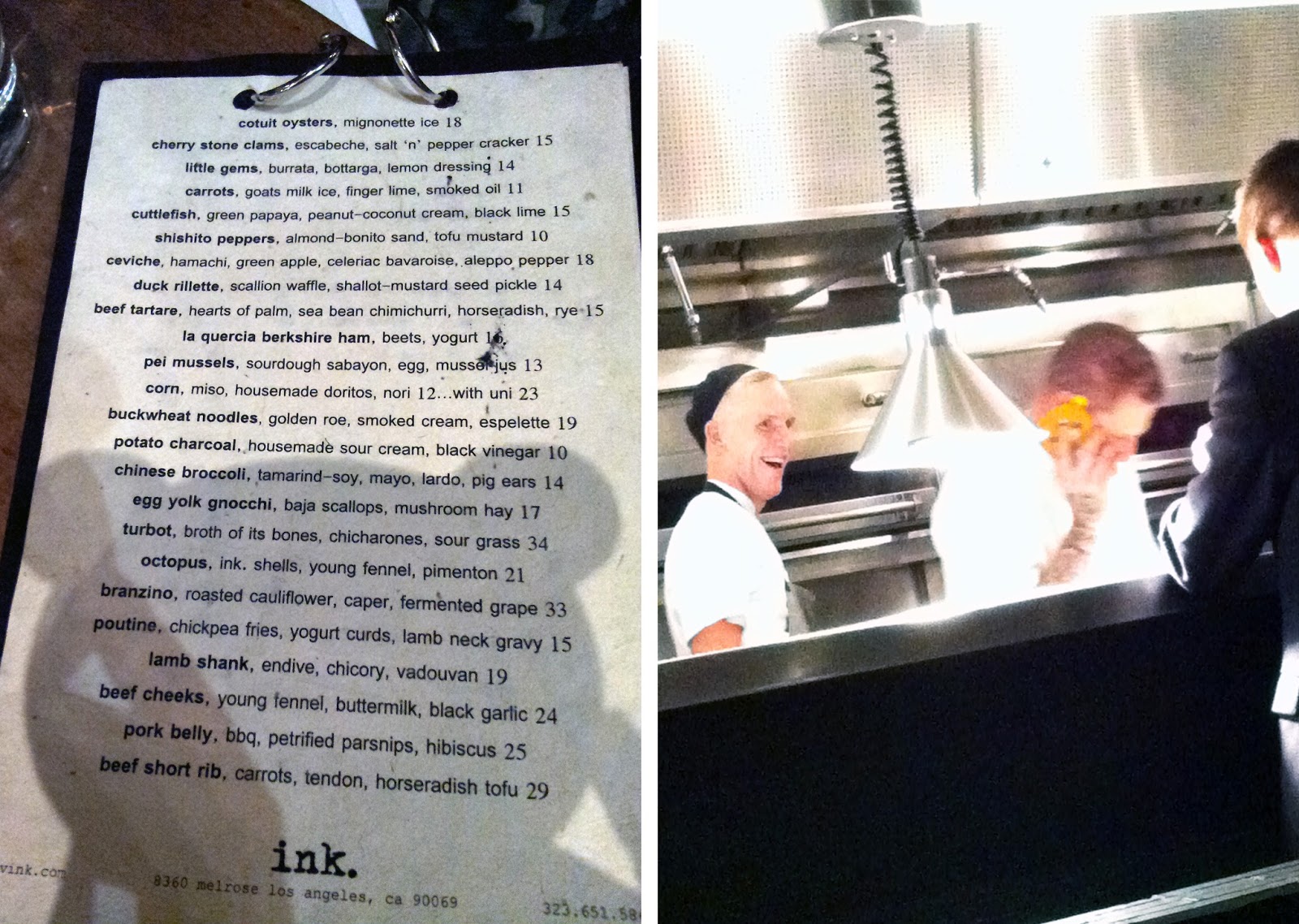 Top Chef Michael Voltaggio was so enamoured by Rina's gargantuan teddy bear cell phone case that he sent his manager over to personally ask if he could borrow it. It was quite entertaining to see the entire kitchen so entertained. ﻿ 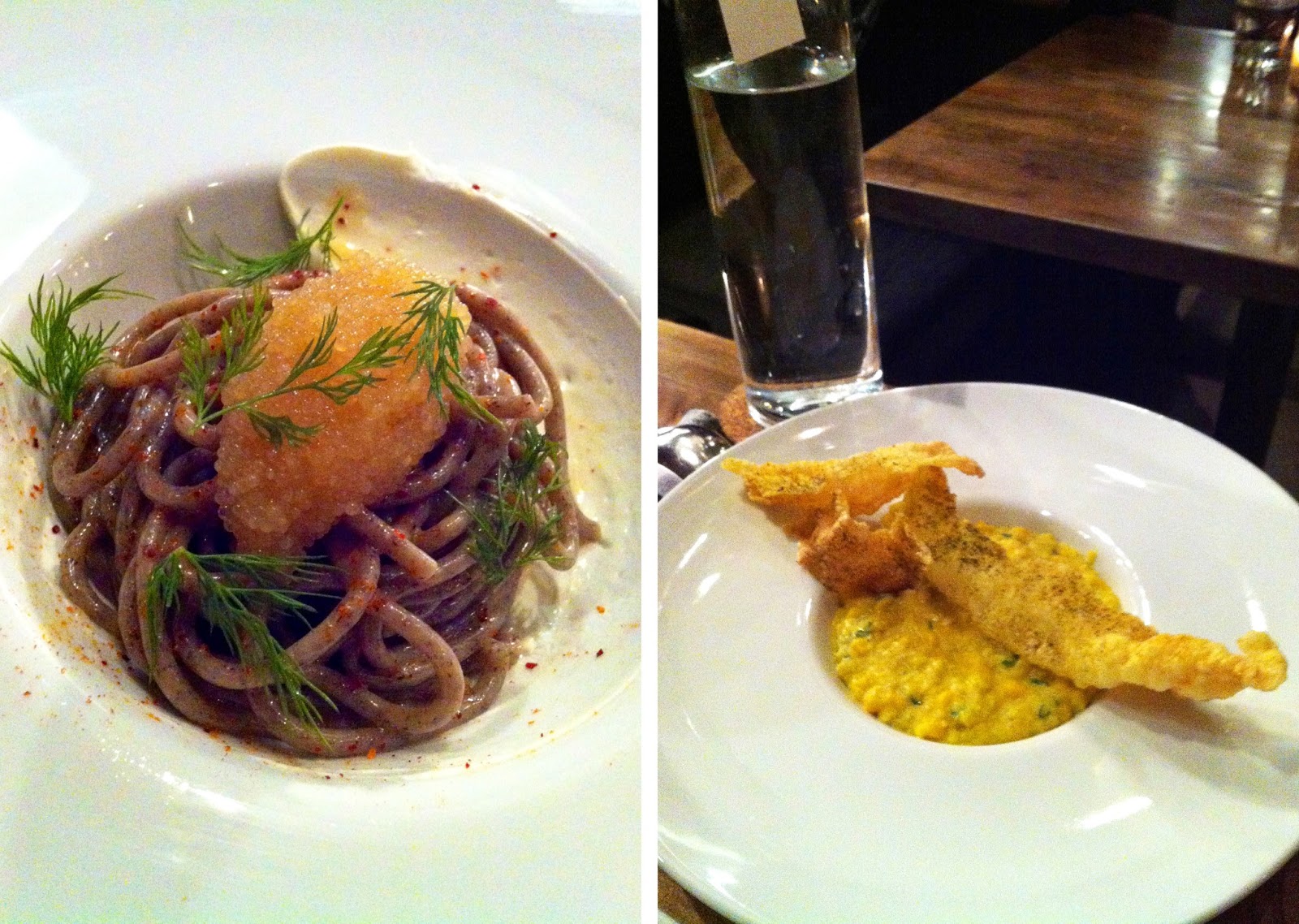 The Buckwheat Noodles with Roe was impeccably savory, creamy, and subtly fishy without being too heavy and the Corn with Housemade Doritos had a good ratio of crunchy/smooth and sweet/salty. ﻿ 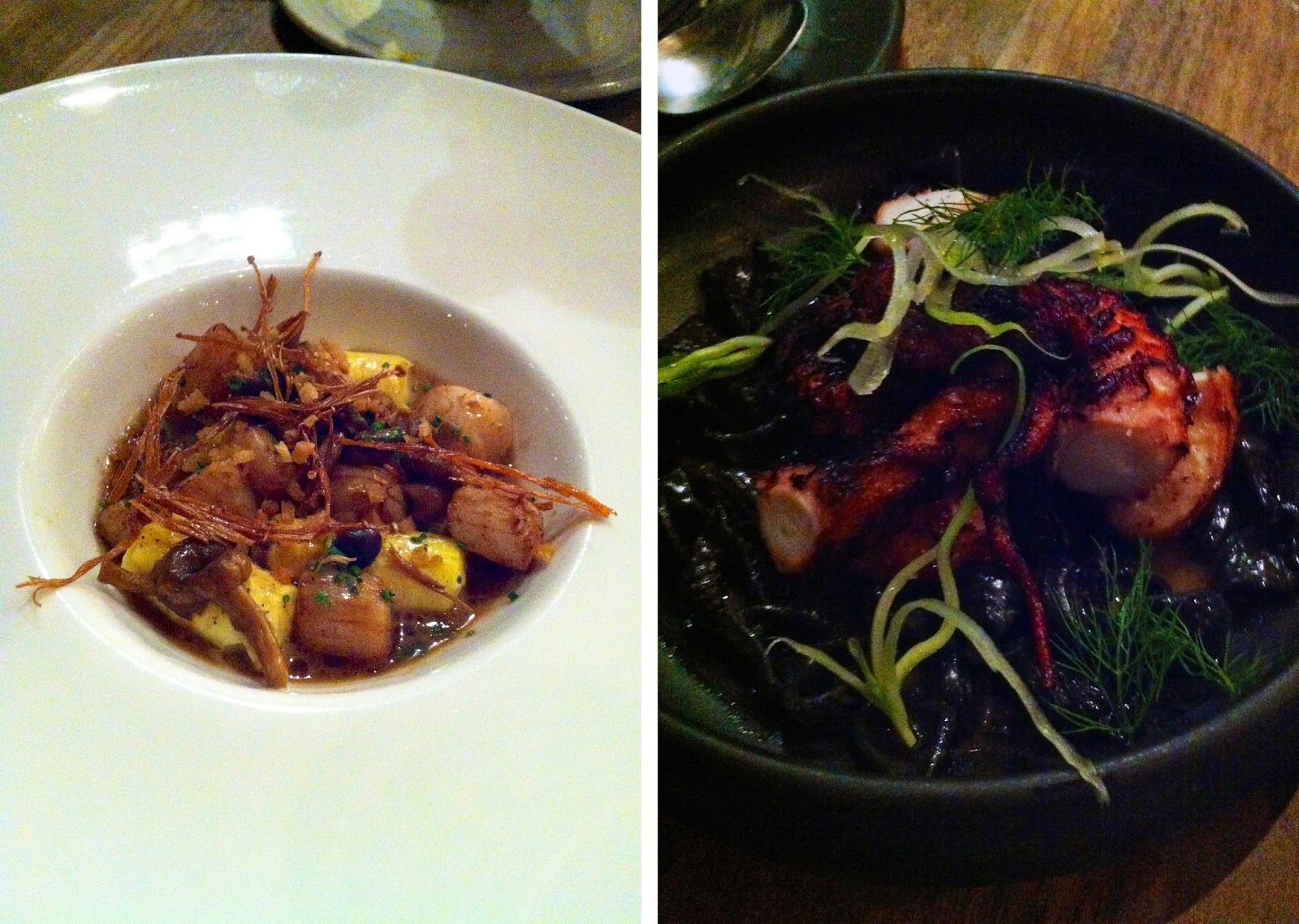 I don't usually like gnocchi but the Egg Yolk Gnocchi was really different and intriguing. The chewy texture of the gnocchi with the surprise gooey yolk at the center got me taking bite after bite just trying to wrap my mind around it. The Octopus with Squid Ink Pasta Shells had probably the most tender octopus I have ever eaten. Not rubbery at all, almost like chicken. 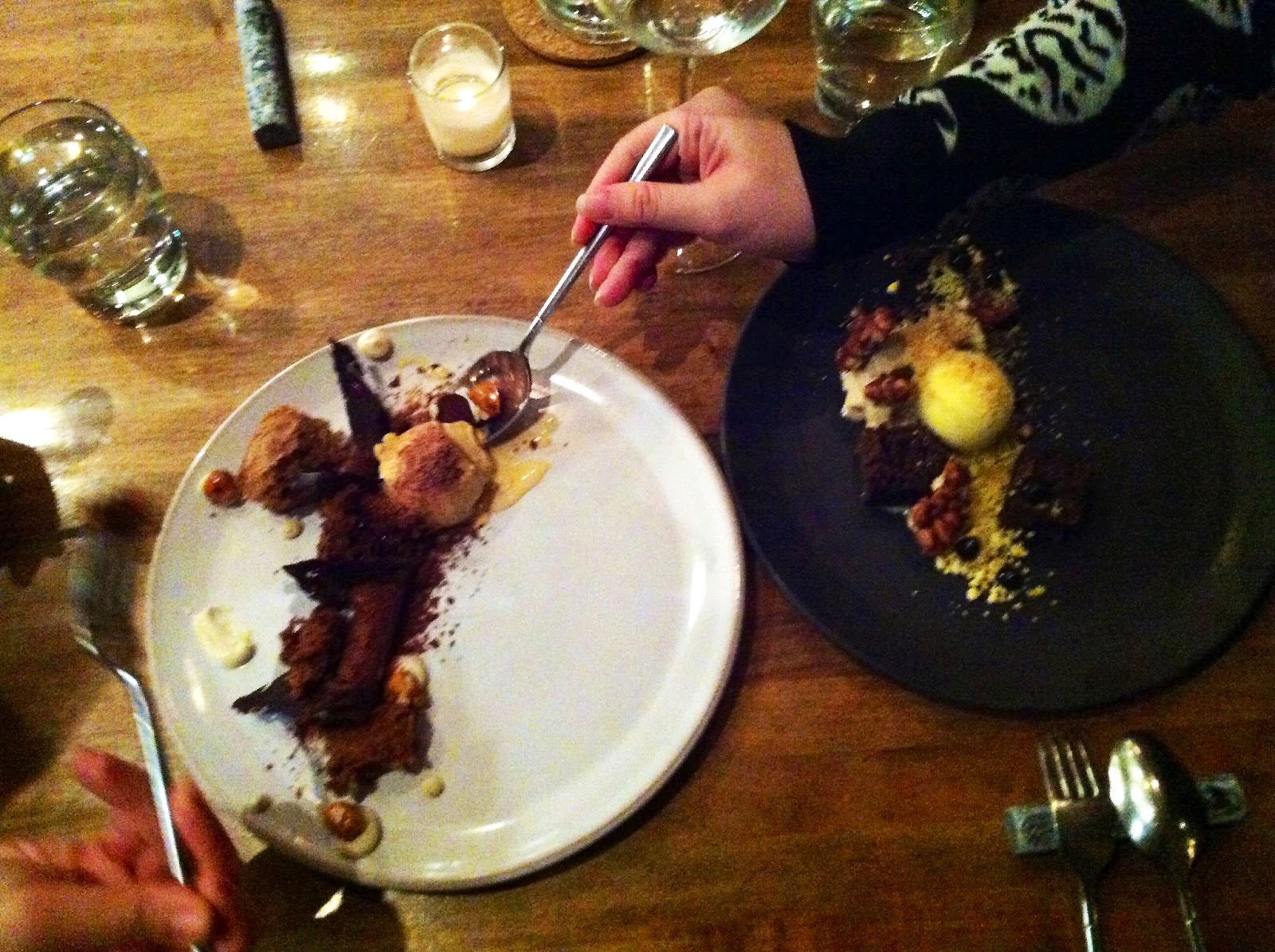 Of course we fat-toothed girls (term coined by Rina) had to order 2 desserts. The Corn Persimmon Pudding and Chocolate Spiced Tofu with Nutella Sponge were both very distinct and original in their composition. There would be a sour flavor bomb right next to a semi sweet crunchy mixture. I appreciated the orchestration in every dish. Ink is not your average hip, hot, or "it" restaurant. It is in a league of it's own. Consider me blown.

JUNETTE
For BDF's birthday this year, I treated him to Jar, which is in the Mid-City area. He had been craving steak for a while, so I did a little research and found Jar, which is owned by Top Chef Master Suzanne Tracht.

The restaurant was cozy with a bit of vintage styling. It was dim (as you can see in the photos) and buzzing with lots of talk about working in Hollywood. I enjoyed my other date for the night - Dean Martin.

The food was really tasty from start to finish. There wasn't a single thing we tried that wasn't delicious or flavorful. We had oysters to start, and BDF tried the specialty, pot roast. Pot roast might not sound that exciting but wow was it so much flavor even on the inside. I had the rack of lamb special, which was also delicious, but it sure was hard to eat. I wanted to give up and just pick it up with my hands and dig in...but I refrained bc I'm civilized. 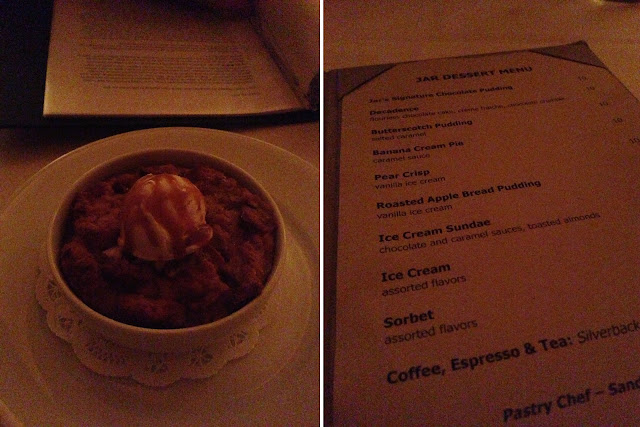 We ended with the most amazing dessert! All I have to say is: bread pudding + apple pie + ice cream. Drool on.
Labels: Discover the Curious City, eats, Junette, los angeles, Monica, restaurants, Top Chef