THE THINGS WE CARRY Vol.7
girl in the curious city 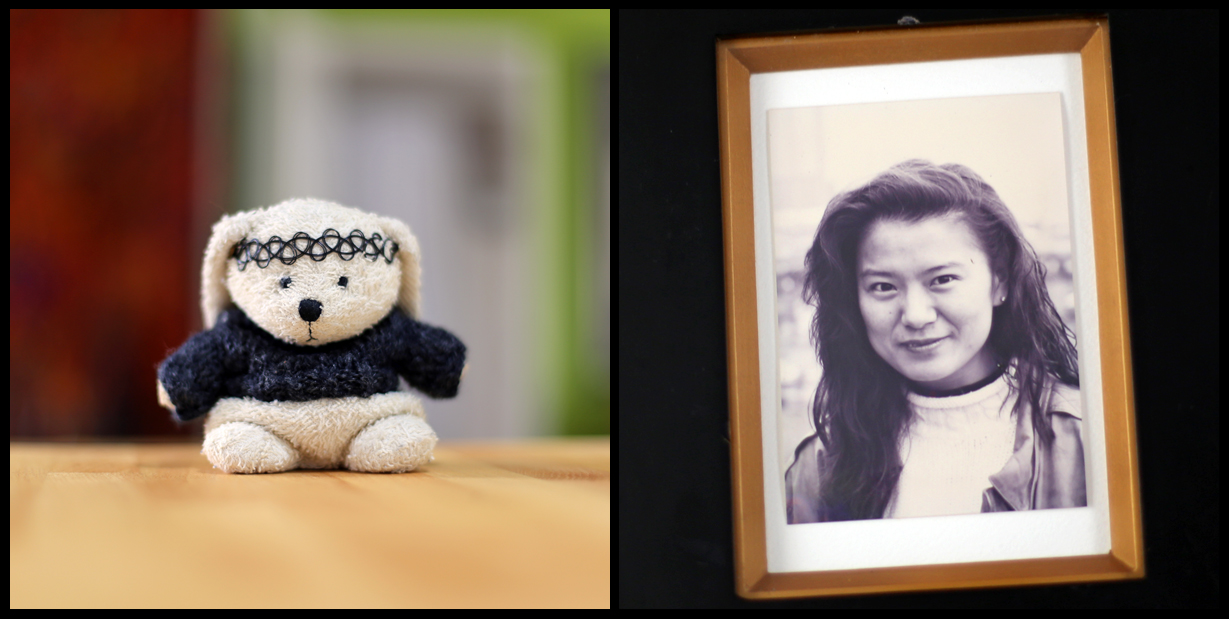 Bear like rabbit is called Babbit. I had her since 1999 when my husband Stuart and I were on our world tour. She was picked up from an orphan basket, with a dozen of her siblings in Eureka, N. California. I had her for the whole 8 months - in New York, Philadelphia, Canada, UK, West Europe, India, and Nepal. I even took her on my hike in Himalaya for 3 weeks. I found her a nice top in Hong Kong, I know she doesn't need it but she looked cool with it! Since then, I take her on all my trips. She is my best travel pal, of course besides my hubby!

I work with Rita everyday. I can't believe I've known her for 6 years now. She is like an older sister to me. Her nature is to take care of everyone. I look up to her in many ways, especially her spirited propensity to see the world. I cannot wait to share Rita and Stuart's newly remodeled kitchen and eclectic house. It's full of objects from their travels which will make you ache to see the world for yourself.

When we first got engaged, Sean and I were talking about having kids in our very far future, and I blurted out the secret thought that I had been mulling over for a while.  And although my feelings may change later, this secret thought is the truth: If I got pregnant and while giving birth, I found out that I was pushing out a puppy instead of a human child, I would not be upset.  I would be happy.
And as I told this to him, I grabbed my dog Dobby, put him in my shirt and pretended to give birth to him.

My love affair with dogs did not have a strong start. When I was a kid, my uncle took us to the pound to pick a dog.  We chose small brown mutt puppy with a black spot on her back.  We all sat in a circle in the laundry room, looking up names in the encyclopedia.  We decided on "Melanie."  When we came out of the laundry room and announced that her name would be "Melanie," my dad promptly told us her name would either be "Mung-mung-ee" (which is dog in korean) or "Happy." We chose Happy. We neglected Happy and I secretly did not like to go outside to see her because she would jump on me and rub mud all over me.  Also, she feasted on her own poop and all the plants in the back yard.  After a year, Happy ran away and did not come back. Much later, I found out Happy was given away to another family where her life ended in a not-so-nice way.  If you are Korean, you'll know what I mean by a word that rhymes with "go-shin-tang."

I have 3 dogs in my life who are mine and not family dogs. Lily was my first dog that I adopted.  She was born deaf and partially blind, and was abused as a puppy, so when I got her, it was a struggle to make her love me.  It took a while, but it eventually happened, and she loved only me.  She tolerated other humans, but I was the only one she loved unconditionally and truly.

In every way, dogs are the good that humans are too complicated to be. I really think that dogs project pure emotions, something that I don't think people are capable of doing.  Every human emotion is adulterated by another.  Example #1: Even though getting married was one of the happiest and most fulfilling moments of my life, I was also racked with fear.  Example #2: When Ron makes prefect, Harry is very happy for him.  But he is also filled with jealousy and anger at why he wasn't made a prefect. Dogs think like this: "I am so hungry!" "I am so excited!"  "I am really happy!" "I am mad that you are petting the other dog!" "I am sleepy!" "I love you!"

Even Lily, who was probably one of the most complicated dogs to have because of her background and special needs, was a direct manifestation of her previous environment. Then, when her environment changed, and I was obsessed with her and making her love me, she also changed.

Lily passed away a year ago.  We found a tumor on her paw, which got infected because she was licking it.  The vet gave her antibiotics for the infection, but she had a kidney condition that was undetected.  Eventually, her kidneys failed.  It was one of the saddest periods of my life.  For a couple weeks, every morning, Sean would come over and I would hug her while he did an IV drip on her to flush out her kidneys.  Even though she was physically weak, she climbed up to lay across my chest every night and rested her head on my shoulder until she fell asleep.

We had to put her down.

After we put her down, Dobby was weird.  He gained a lot of weight.  I wanted a playmate for him, but had to wait until Sean was ready.  Then we found Bruno at a rescue in Lake Tahoe.  We drove to get him a week before our wedding!

Now that I made myself cry with my story about Lily, I'll get back to my main point.  I chose my dogs as the Things I Carry because I love them and they love me. They also love Sean, but this post is about me.

Gina is my older cousin who always seemed to know the answers for all my questions (even if now I realize she may have made up the answers.) It's all too easy to be swept away by her confidence and passionate feelings (for example, the night she declared her undying love for Zack Efron, and I was tricked into watching movie after terrible movie starring Zack Efron.) Gina is artistic, has her own unique style, and is a true softie at heart. Gina was an art student, and now she is in the fashion industry. She is a newlywed, and she shares her hip downtown home with her husband. I can't wait to show you their place later this week!
Labels: dog, family, friends, Girl in the Curious City, Junette, Monica, The Things We Carry