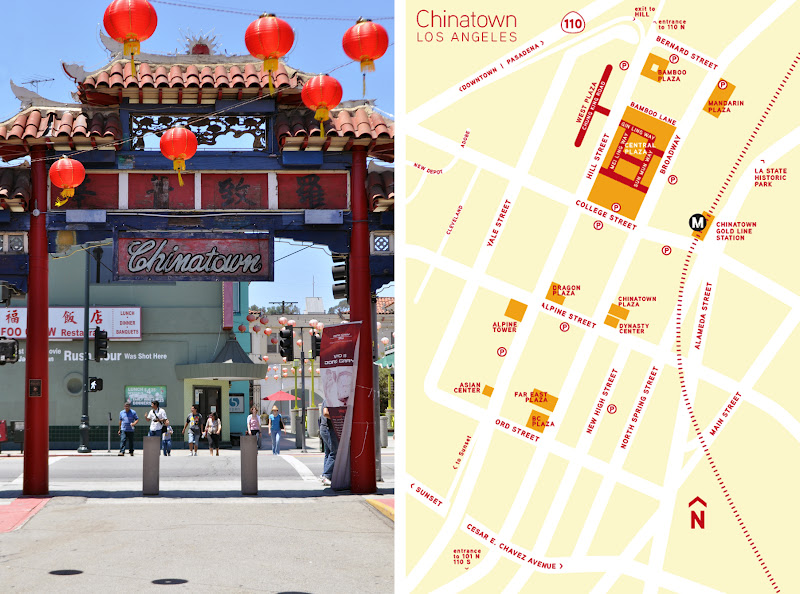 There are so many different neighborhoods concentrated in Los Angeles that you don't have to go far to discover a new cultural experience. Since Junette and I have been living in LA for most of our lives, we're sharing some of our favorite places with you and hopefully in the process demistifying any questions or quibbles you might have about them. First up is Chinatown and Koreatown.

Where is Chinatown?
Chinatown is on the north side of Downtown LA, right below Dodger Stadium and the 110 Freeway. Its other two edges are marked by Cesar Chavez and Alameda. Chinatown runs mainly along two parallel north-south axis streets Hill and Broadway, which are connected by the smaller east-west axis streets Ord, Alpine and College. See map above from the Chinatown website.

A Little Bit of History...
Old Chinatown began in the 1860s, just south of where it is today along "Calle de los Negros," an old alley named after the Spanish speaking, dark-skinned community that once lived there. The history of this street is quite interesting and you can read about it here and here. Chinatown eventually grew and flourished, but was then hindered by discrimination and the Exclusion Acts from the 1880s through early 1940s. The new Chinatown of today was built and developed by the Chinese community and opened on June 25, 1938.

Getting to Chinatown
The metro Gold Line drops you off one stop from Union Station, right in the center of Chinatown. If you're on the freeway, the easiest way is to take the 110 and exit Hill. Coming from the west on surface streets, I take Sunset Blvd all the way until it becomes Cesar Chavez and turn left on Broadway. Once you see the dragon gateway below, you know you're in Chinatown. 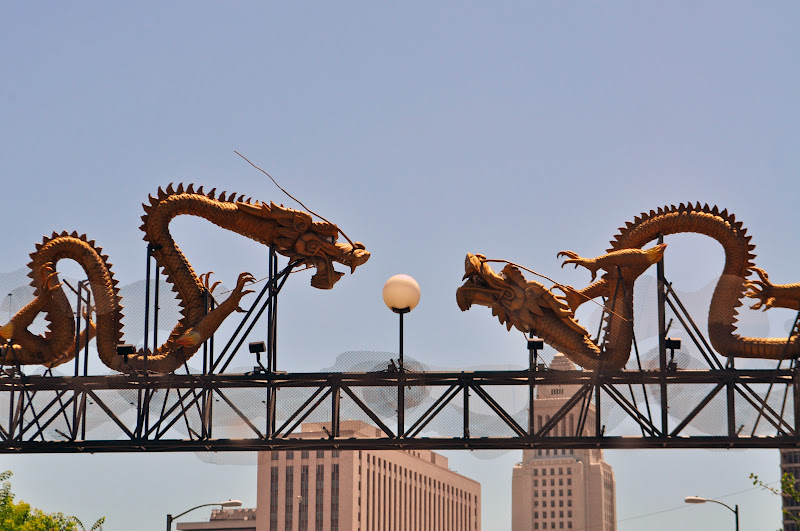 Culture
Chinatown today has become a tourist attraction and the majority of the Chinese population moved east to Monterey Park/San Gabriel Valley. The remaining Chinese community is mostly Cantonese speaking. There is also a large ethnic Chinese from Vietnam community, hence all the delicious pho places. Although many Chinese do not live here anymore, they still frequent Chinatown. My mom always drove from Torrance to buy the freshly butchered chicken, and my dad loves the curb-side drive-by newspaper service. Antony's parents drive from Lancaster to go to the temple here, so we often meet them for dim sum. There is definitely an abundance of good food here so check back soon for my guide to all the good eats in Chinatown! 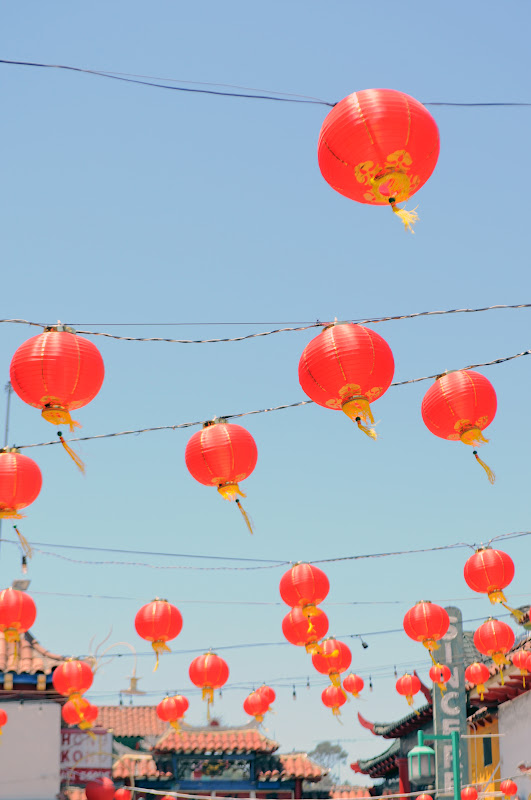 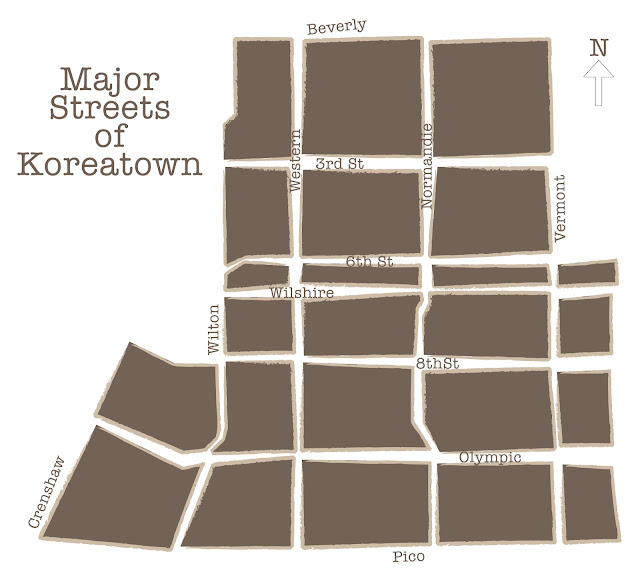 This week, we'll be posting a series of guides designed to help demystify Chinatown / Koreatown. Whether you're intimidated bc you only speak English, or are not from LA, or live in LA but have never ventured outside your safe zones, we hope these guides will make you feel adventurous.


Where Is Koreatown?
Koreatown is generally east of Hancock Park, south of Hollywood, west of Downtown, and north of the 10 Freeway. The exact boundaries are a little fuzzy, but I think my map is pretty accurate. It's different, for example, from the boundaries that the LA times uses. The heart of Koreatown is along Wilshire and 6th Streets, between Western and Vermont. This is the commercial and social core of Koreatown.

Who and What is In Koreatown?
Historically, Koreatown was the geographic concentration of immigrant Korean Americans. They lived, worked, played, worshipped, etc. there. You can visit the Ahn House (relocated onto the USC campus), which was part of the "original Koreatown." Given that the Ahn House was near USC, you can see that over the years, the geographic boundaries of Koreatown have shifted.

Today, Koreatown's demographics tell a different story about Korean Americans. Korean Americans do make up a large number of residents in Koreatown, but the majority of people living in Koreatown are Latino. Koreatown functions more as a business and social/cultural center for Korean Americans. There are a lot of pockets of Korean Americans living in the east (Diamond Bar, Rowland Heights, etc.), north (Glendale, La Canada), and south (Torrance, OC). Many of these areas have also developed mini Ktowns, but nothing beats the real thing - the people watching, the concentration of bakeries : ), and endless drinking spots.  There's a reason why people say that Korean food in LA's Koreatown is even better than what you can find in Seoul.

Getting to Koreatown
Koreatown is near the red and purple lines of the metro. The Wilshire/Vermont or Vermont/Normandie stops bring you within a few blocks of the heart of Koreatown. If you drive though, almost every shopping center has a valet. So, don't worry about the lack of parking bc no one (except me) seems to park and walk in Koreatown.

Culture
Koreatown is where the party's at 24/7. I'm not joking! When I walk Bennet any day of the night, especially Wednesday - Sunday, people will be out drinking and eating. After hour secret drinking spots and 24/7 restaurants mean Koreatown is always happening.

Beauty Everywhere
I've often heard that Koreatown is ghetto. People look repulsed when I tell them I live here. It is dirty, gray, and often ugly. But, beauty can be found - even in Koreatown. 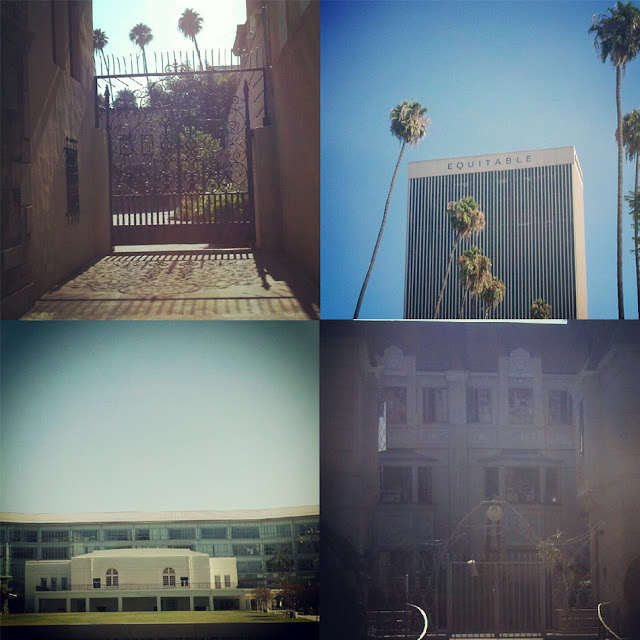 Dogs in Koreatown
You know I had to write about this. It's hard to have a dog in Koreatown. It is smack in the middle of the urbanest of urbanity. No parks, and sometimes no grass or trees on the sidewalk either. The idea of eating outside at a cafe with your dog hasn't seem to catch on quite yet either.

That about wraps up my introduction of Koreatown, and later this week, I'll be sharing some delicious eats and things to do in Koreatown!
Labels: Chinatown, Discover the Curious City, Junette, Koreatown, los angeles, Monica