MONICA
Antony is a simple guy. He owns very few material things. We always joke about how he could fit his entire life in the trunk of his beat up car. No surprise here that his minimalist lifestyle carries over to his manly skin style. 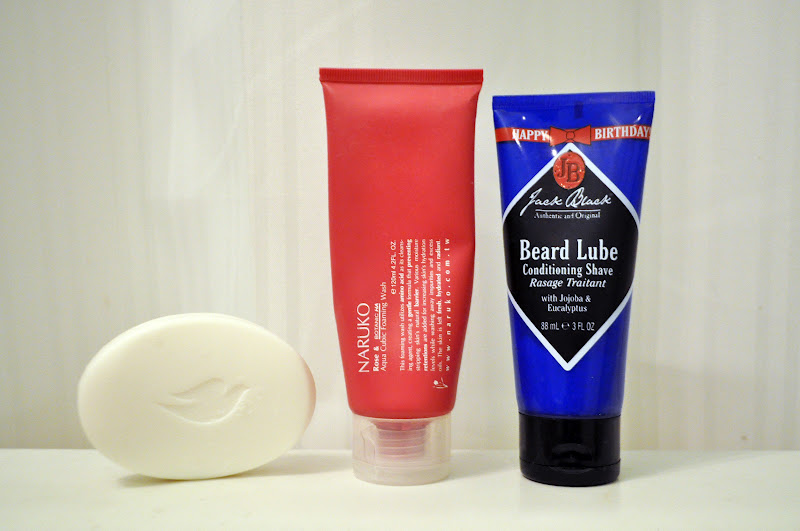 Step 1: Wash
In the shower, Antony uses Dove White soap. I've used Dove all my life and converted Antony into using it as well. It is 1/4 moisturizing cream which helps alleviate his eczema (red itchy dry skin). For his face, he uses my Naruko Rose Foaming Wash, reviewed previously here and here. When he shaves, he uses Jack Black Beard Lube which I redeemed for him with my Sephora beauty insider birthday gift. Now that's love and sacrifice. He really likes using it on his 10 strands of facial hair because it's both shaving cream and lotion. "Efficient" he says. FYI, note how all 3 items technically belong to me... 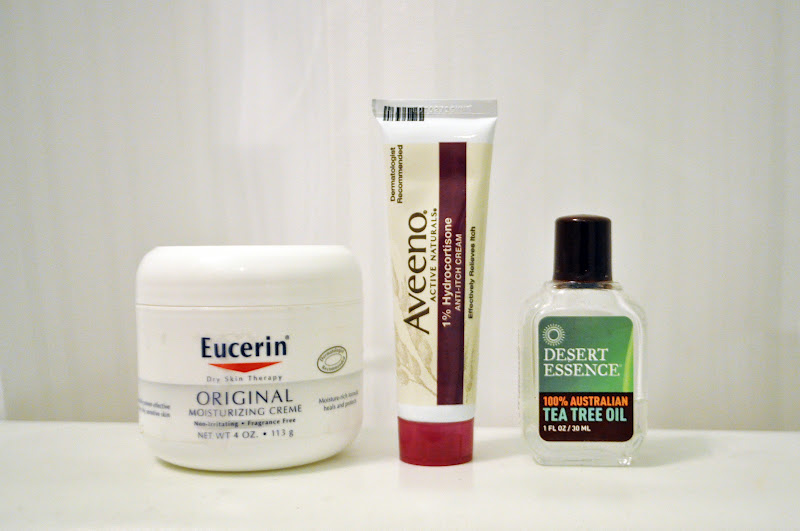 Step 2: Maintain
The only lotion able to soothe Antony's eczema is Eucerin's Original Moisturizing Creme, reviewed here. He uses it day and night on his face. I got him into using this product ever since we started dating back in college and he's never turned back since. Though I don't know what he would turn back to...I don't think he ever moisturized before I showed up. For his severe eczema areas which are mostly on his body, he uses Aveeno Anti-Itch Cream. This is the only product he actually bought for himself so it must really work. And finally, although Antony has eczema, his face is oddly oily and acne prone. For spot treatment, he uses the Tea Tree Oil that I bought from Trader Joe's. Just use a cotton swab to dab it on your emerging pimple before bed and by morning the pimple will be gone, significantly smaller, or dried up. Again, note that 2 out of the 3 products belong to me. If he were to pack up his life, only the Aveeno Anti-Itch Cream would go into the trunk...

Writing about Antony's skincare routine got me thinking. Who needs so many beauty products anyway when you look like a Chinese movie star! Barfing yet? That's Daniel Wu on the left and Antony on the right. I know so hard to distinguish. Barfing now???

BDF is the embodiment of laziness when it comes to his face and skincare. His top reasons for picking products:
Here are his skincare product comments, and I hope you find them entertaining helpful.

Cleanse
derma-e Glycolic Facial Cleanser With Marine Plant Extracts: I used to use this, and BDF really liked it. Unfortunately when I went back to Whole Foods, they had a different version, which he didn't like at all bc of the "smells funny"ness. But he still used it all.

JASON Super C Cleanser: I bought this originally and I didn't like it very much. I gave it to BDF, and now he uses it as his in-shower face wash. He likes it bc it was free and he didn't have to go buy it himself...
Aveeno Foam face wash (similar to this): He likes that it foams up by itself (is this fun? or is this lazy? both?).

Prep
Kiehl's Cucumber Herb Alcohol-Free Toner: BDF thought this one made him feel clean, but he didn't like that he had to apply it with a cotton pad.
John Masters Organics Rose & Aloe Hydrating Toning Mist: When BDF first saw me use this one, his mind was blown. He loved that it was a spray.

Moisturize
Kiehl's Ultra Facial Moisturizer: BDF uses this one, but I don't think it's cutting it. It's not moisturizing enough for him, and he has some dry spots that are bothering him.
Clinique M Lotion: To try to address some of the dry spots, BDF is going to try this lotion out. We'll see if its effective without making him too oily in other spots.

Protect
BDF uses the same sunblock as I do, but he only uses it when he thinks he'll be outside and he does so begrudgingly... : /

Like me, one of the things that BDF was self-conscious of is his pores. So, we both tried out a new product from the Face Shop, designed to minimize pores. I bought the Pore Minimizer Controlling Clay Mask, and you apply it to your face after washing and applying toner. Then you leave it on for 10-15 minutes and then rinse off. I found that it did minimize my pores, but the effect on BDF was much less obvious. Want to see the mask in action? See below.

And in keeping with the theme of scaring you with a frightening picture, here's another one of some people I may or may not know: 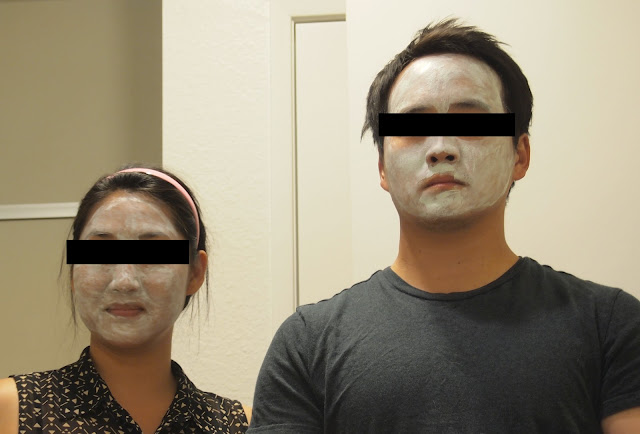