THE THINGS WE CARRY Vol.3
girl in the curious city

For this edition of The Things We Carry, we asked our significant others to share with us. 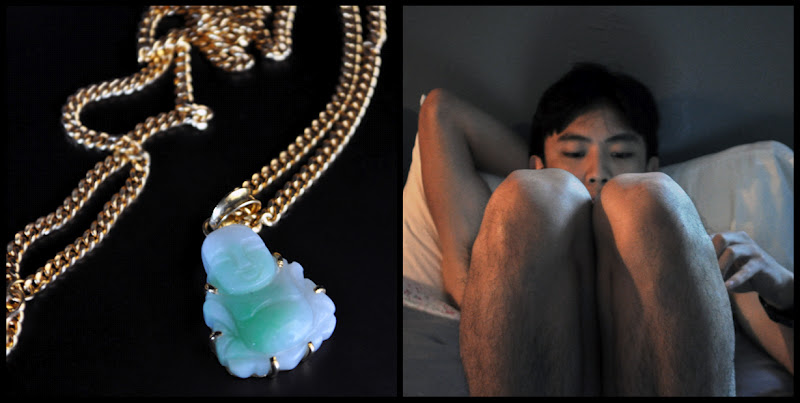 AT: My necklace embodies a lot of who I am, not in the sense of what Buddhism teaches, but specifically the person who I am today. My mom got it for me at my aunt's jewelry store in Australia when I was in my early teens. She told me they chose a very pure jade that hadn't aged yet, meaning it wasn't a dark green. She told me it would get darker as I wore it over the years.

I do believe in a lot of the teachings of Buddhism, but I have lost or grown out of the cultural aspects. People should be good to one another because it makes sense to the operation of society, not because a higher being stated so. That's what I believe now. I am agnostic in my spiritual beliefs, I have found beauty in science. But that is not to say that I don't think science and spirituality work together.

When I look at my necklace of Buddha it reminds me not of my disconnection from Buddhism, but more so the disconnect I have from my parents, who were uprooted from their homeland to seek a better future for me and my sisters. I have tried to hold onto my ancestry but it is hard when the source is so distant. I know my parents wish I were more Chinese since that is what they identify with.

My necklace has never fully turned a dark green. It is most likely because I haven't worn it enough or the compounds in the stone aren't correct for darkening. But a part of me thinks that it is because I have lost and forgotten the culture that I came from.

BDF: I caught this foul ball when I went to go watch a Korean professional baseball game at Jamsil Stadium when I was in Korea in 2009. I have been to a lot of baseball games in America, (go Dodgers) but I have never caught a foul ball.

It was a cold night and because the stadium was somewhat empty, we moved down away from the cheerleaders (in Korea, pro teams have cheerleaders). It was about the third pitch and it was a foul pop up towards the 3rd baseline. I battled and reached up and grabbed the ball. BOOM, instant memory.


BDF was a high school jock and is an avid sports fan (Gooo Niners!). He will probably kill me for writing this, but he was Captain of his high school tennis team! My high school self would swoon...'cept Tennis Captain doesn't have the same ring as Basketball Captain : P  The first sport he played when he moved to the U.S. from Australia was baseball at Little League, and he insisted that he hold the baseball that way in the photo.